Police in Munich said Wednesday they were investigating a Greenpeace activist for “several offences” after the 38-year-old parachuted into the stadium before the Germany-France Euro 2020 match, injuring two people.

The widely condemned stunt, which Greenpeace said did not go as planned, was captured on camera shortly before kick-off on Tuesday evening.

The activist was seen flying over the stadium in Munich strapped to a yellow parachute microlight before apparently getting tangled in overhead camera wires.

He was thrown off course and narrowly avoided crashing into the stands before landing on the pitch among the players.

His parachute had “Kick out oil!” written on it.

The pilot, later identified as a 38-year-old from Germany’s Baden-Wuerttemberg state, was detained by police.

Police said two men were injured during the activist’s attempts to land. Both suffered head injuries and were taken to hospital.

There was no immediate update on their condition on Wednesday morning, a Munich police spokesman told AFP.

The activist himself was not hurt.

“The aircraft was seized,” Munich police said. “Investigations are now being conducted into several offences under the criminal code and the air traffic act, among others.”

Greenpeace was quick to apologise for the protest gone awry, saying the aim had been for the activist to drop a latex ball with a protest message onto the pitch.

“Technical difficulties forced the pilot to land inside the stadium. We deeply regret that this put people in danger and caused injuries,” the environmental campaign group said.

Greenpeace said on Twitter that the protest action was aimed at urging Euro 2020 sponsor Volkswagen to stop selling diesel and petrol cars.

The botched protest drew a chorus of condemnation.

Munich police said they had “no understanding whatsoever for such irresponsible actions”.

UEFA called it “a reckless and dangerous action” which “could have had very serious consequences for a huge number of people attending”.

“This was not a trivial offence,” he said. 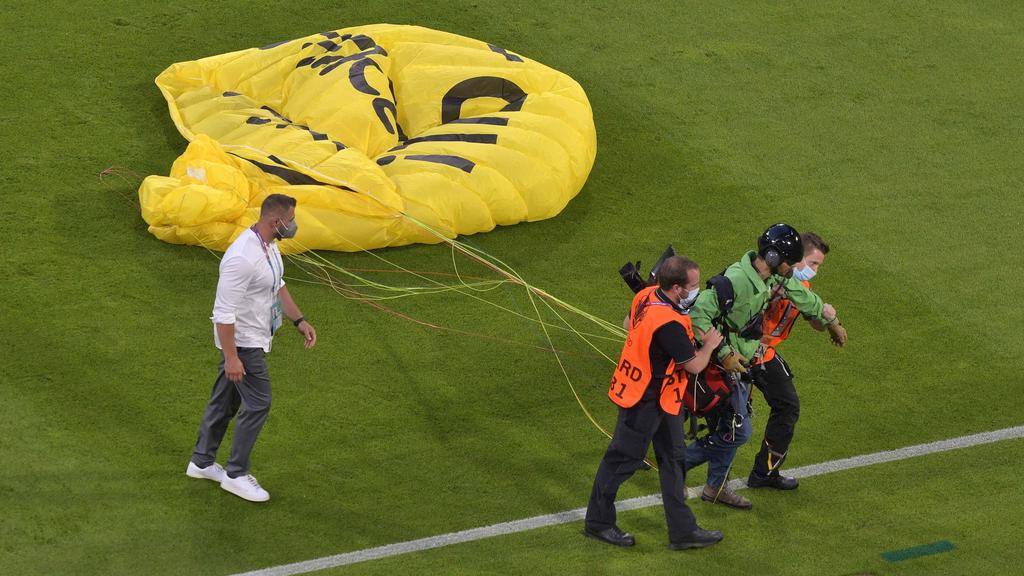